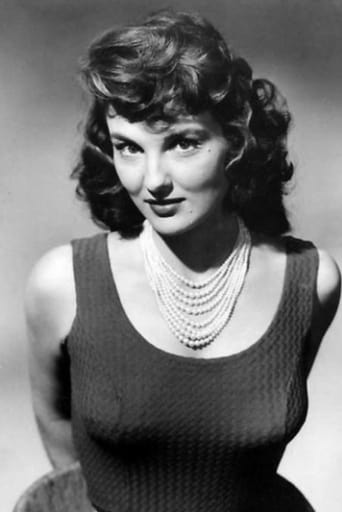 Born Mary Jane Hayes in Charleston, West Virginia, she was in the class of 1948 at Calvin Coolidge High School. Hayes won the title of Miss District of Columbia. She went on to represent D.C. in the 1949 Miss America pageant. Although she did not win the competition, it provided her with the opportunity to work in local television before moving to Hollywood to work for Universal Pictures in 1954. Taking the name Allison Hayes, she played small roles in a handful of films at Universal for a couple of years. In 1955 she filed a lawsuit against the studio over injuries she sustained while filming her second picture, SIGN OF THE PAGAN. Universal released Hayes from her contract, and she was subsequently signed by Columbia Pictures. After appearing in a handful of Columbia films including COUNT THREE AND PRAY, MOHAWK, and WOLF DOG, Hayes was given in the lead role in ATTACK OF THE 50 FOOT WOMAN (1958). The film would eventually gain a cult following and become the performance for which she is best known. However, it did not escalate Hayes's career at the time. For several years she remained consistently employed in movies and on television (including an extended stint on the soap opera "General Hospital" and several appearances on her friend Raymond Burr's "Perry Mason" series). By the mid-1960s, though, Allison Hayes's career was all but over and she was beset by health problems. She would later admit that the pain of her illness led her to contemplate suicide, and that her symptoms were not taken seriously by doctors. After reading about metal poisoning in factory workers and recognizing the similarity of the symptoms described to her own, she hired a toxicologist to test a calcium supplement she'd been using for an extended time. The tests revealed that the pills contained an extreme amount of lead, and that Hayes was likely suffering from lead poisoning. She mounted a campaign to pressure the Food and Drug Administration into banning the supplement, but her condition deteriorated to the point of total incapacity. In 1976 she was diagnosed with leukemia, and began regular cancer treatment. Allison Hayes died February 26, 1977 at the UCSD Medical Center in La Jolla, California, just short of her 47th birthday. In a letter that arrived after her death, the FDA informed her of amendments being made to the laws governing the importation of nutritional supplements, largely as a result of her advocacy.