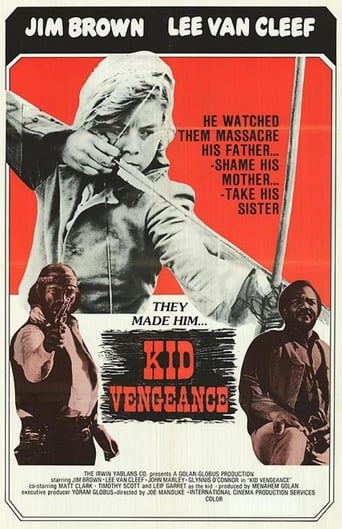 One of Cannon Films' two 1976 Italian-Israeli co-productions starring Lee Van Cleef and Leif Garrett (Gianfranco Parolini's Pistola di Dio was the other), this spaghetti western was actually shot in the Middle East by American director Joseph Manduke. Pop star Garrett plays Tom, a teenager who teams with a black gunfighter named Isaac (Jim Brown) to avenge his family. The culprit was McClain (Van Cleef), a sadistic outlaw who carried out the brutal rape-massacre, but his role is minor, as most of the film deals with Tom's maturation and coming to terms with his feelings. Omnipresent 1970s character actors Glynnis O'Connor and John Marley co-star. If there is anything remarkable about Kid Vengeance, it is Francesco Masi's fine musical score, but the film is otherwise anemic.